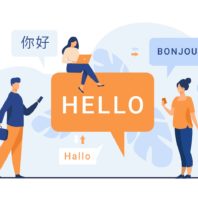 Nobody wants to get surprised by an awkward linguistic gaffe. Nevertheless, as a non-native French student, it is inescapable at times. We’ve been there too: conflating words that sound similar, getting your expressions mixed up, forgetting our intonation.

However, while getting it wrong may seem like the worst stuff in the world at the time, it may teach us a great deal about the tongue we’re trying to master.

Although there are many parallels and regular fixtures across French and English, many of which are unexpected, there seem to be many key principles that contrast between the two. It’s simple to have your circuits twisted from time to time! Especially when you are a non-native French speaker learning without the guidance of a native French tutor , perhaps reading this article is a good start.

Verbs like this can be confusing, but they can also be interesting. “What’s strange about this phrase? Isn’t it a straightforward 1st group verb?” many of you must be asking. Okay, you’re correct, but we’re not referring to the conjugated form. Let’s interpret this line considering that the common translation of “manquer” is “miss”:

The correct sentence is “Tu me manques.”

In French, the person who is missed is the subject, while the one who is missing (the other one) is the object. The correct expression is “A manques à B” / “A is missing from B.”

So, in essence, know that when you are missing somebody, they are truly of more importance than you, hence they should be the focus, not you.

In your online French classes, you’ve likely heard of the shortening of several French words in front of a vowel. For instance, je ai -> j’ai le aspect -> l’aspect

You’re also aware that the letter “h” in French is not spoken. For instance, the word “hiver” (winter) is pronounced “iver. However, either the “h” or “m” operates as vowels or consonants, or if contractions are required before a word beginning with a “h,” is not an easy matter for non-native French learners. In reality, both scenarios are possible:

This is a minor grammatical problem, yet it is a fairly common error.

Consider this phrase: “J’attends ma amie ici.” Because “amie” includes a “e,” the person speaking is referring to a woman. Because the term “ma” is used for feminine nouns, everything appears to be accurate here. Nevertheless, it does not ring very well to a French ear, so we substitute “mon.”

4. Mixing up rencontrer and retrouver

In our French lessons online we often instruct students to keep this in mind.

The word rencontrer (to encounter) may appear easy enough, yet it is only employed in very particular situations. Although you may be inclined to use it in all cases of “meetups,” it refers to running into each other on the road, encountering someone by coincidence, or seeing somebody for the very first occasion. If you wish to purposefully catch up with your buddies, you should use the word retrouver (to find).

The simplest method to recall the distinction between the two terms is to channel your innate investigator and envision each meeting as a sleuthing expedition. Identifying your friends’ locations in the crowd is crucial when meeting up with them. With your friends back together, you can complete your appointment or meeting!

The English language’s standard way of describing time is by using the word “for.” For instance, when explaining how long we have lived in a place, we might say, “I have lived here for five years.” It isn’t always used in the same way as its English equivalent, although the word pour (for) is deceptively similar to the word of the same name in English. If you want to describe a period of time in the French language, you’ll need to use pendant (during) as opposed to “for.”

You have likely heard French speakers saying “I was in Paris during five years.” when speaking English. This is a great way to learn how they use parallels in English and can provide valuable insight into literal translation in reverse.

Despite the pendant being able to describe most time frames, there is one major exception: If you want to refer to a future time frame, you should use pour.

6. Using the word visitor to refer to giving anyone a visit

Apart from taking French lessons online, planning a trip to someone in France may be the ideal method to enhance your speaking abilities, but be certain you know how you are going to explain the act! While you may be inclined to suggest “Je vais visiter mon grand-mère” for “I’m going to see my grandmother,” this will not get you very far in French.

Rather, you’d be far better off using rendre visite à (to pay a visit to) to say the similar idea. The visitor is only appropriate in some situations, including when you’re visiting a location or a monument instead of a person. Getting it wrong in French may feel like the end of times, yet it may be beneficial to your understanding. Your online French classes come to fruition only when you use French in daily life.

Awkward verbal gaffes may stay with us far more than the top French courses, prompting us to pay close attention to certain aspects of the language. While remembering the aforementioned will undoubtedly help you improve your French, it’s also vital to realize that everyone makes mistakes from time to time.

The biggest feature to do is to rectify mistakes, pull yourself up, and get back on the path to language development! And if you need help learning French better, sign up for Learnplant’s online French classes.