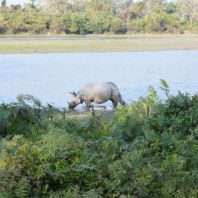 All About Kaziranga National Park

The Kaziranga National Park is an example of the top national parks in the world. Kaziranga is where nature unfolds its pristine form in a kaleidoscope of colors, where wildlife roams freely, and where man and nature come together. This central Indian national park is located in Assam, in the districts of Golaghat and Nagaon. Let’s move back to the start of the twentieth century, to 1904, when this lovely wildlife refuge was established and named National Park 68 years later.

1. Kaziranga National Park is one of India’s most crucial wildlife tourist destinations. Thousands of visitors flock here each year from all over the country and the world to explore the diverse species and marvel at the natural empire’s splendor. The excellent topography, complete with a river and various meadows, runs the length of the park.

2. Kaziranga tourism is about more than simply seeing one of the park’s many one-horned rhinoceros or tigers; it’s also about watching the park’s three gigantic herbivores, the Asiatic Elephant, Swamp Deer, and Asiatic Water Buffaloes. The Park has also been named as a significant bird habitat.

3. Exploring the hidden mysteries of the deep jungle riding elephants directed by professional Mahouts is one of the many attractions in the Kaziranga National Park. The opportunity to ride these gorgeous beasts on the open grounds is a rare treat for visitors.

4. Another alternative for seeing the national park is to go on a pre-booked jeep safari. Taking a vehicle safari through the Kaziranga woods is the pinnacle of tourism. Six tourists can be accommodated at a time in an open gypsy. It leads you to an area of the portion that has yet to be investigated.

When is the best time to go to Kaziranga National Park?

There are many people who are quite passionate about visiting national parks and look forward to exploring new and well-developed national parks every now and then. Kaziranga national park comes under the category of one of the best national parks in the country which has been under the top list of the people for the longest time.

The Kaziranga national park management has made it essential for all visitors to obtain permission from administration personnel before visiting the park. Authorizations can easily be obtained from private entrances if one wishes to go on a day trip.