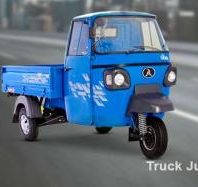 Atul Gem involves three-wheelers of diesel and CNG fuel types. They follow BS4 and BS6 emission norms, making them eco-friendly for users. All the vehicles are developed with advanced technologies and equipped with innovative features. As a result, high performance and high earning of users. Atul Gem three-wheelers are the best medium for transporting materials and passengers in or around the city. In addition, Atul Gem Three Wheelers are available at a reasonable price range.

It is a very well known three-wheeler in India used in the cargo segment for transporting light materials. The three-wheeler comes with a 9 hp and Four Stroke Water Cooled engine. Atul GEM Cargo has 995 KG GVW and generates 23.6 NM of torque. Atul Gem Three Wheeler price is Rs 2.66 – 2.96 Lakhs*.

It is another best three-wheeler in India used as a passenger vehicle. The auto has 9.5 hp with 1 cylinder and Four Stroke, Water Cooled engine. It is loaded with a 4-Speed gearbox to control overspeeding. Atul Gem Paxx price is cost-effective for users.

To get a complete list of Atul Gem three-wheelers, visit Truck Junction.