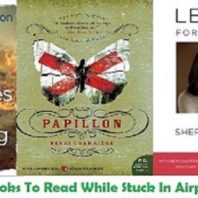 Best Books to Read While Stuck In Airport

I was traveling to Los Angles. I was waiting at Dubai International Airport, waiting for in the lounge. I suddenly was starting to read that the flight has been delayed for 5 hours. It was a sudden shock and disappointment.

I ran to the baggage weight age area. They told me that there was a technical fault in the flight to Bangkok airport. There was nothing to do except to wait. I entered the duty-free area. I started to browse for different products.

Then I saw some interesting titles of the books on the shelves. I took the assistance of the saleslady. She just gave me 3 books of my choice, which I read all that time. It didn’t feel that time flew so quickly. Nevertheless, I am sharing it with you:

1.      Their Eyes Were Watching God Written By Zora Hurtson

The story revolves around young American girl Janie Crawford. Her ancestors belong to both African and American. As she grows up, she starts to look for true love. This sets the foundation of the events which will unfold in her life.

The time discussed is of the 1920s, where it was difficult for any African to get equal rights.  Luckily she gets the first breakthrough. Her grandmother proposes a man called Logan.  Janie marries him. Logan doesn’t turn out to be a good husband. He behaves badly with her. Until one day Logan in an argument with Janie, warns to kill her.

Janie leaves Lagon. She meets another rich man, who is the mayor of Florida. His name is Joe Starks. He blames his wife for all the problems in his life. He is very possessive about his married life. Joe is not flexible. Joe doesn’t want to listen to Janie.

One day Joe falls sick and doesn’t want Janie to visit him. Janie on the other hand manages to see him on death bed. She shares her feeling with Joe. The death of Joe ends this relationship. Janie is alone again.  After some time she meets a Tea Cake. Janie is 12 years older than him.

Janie is happy to find love again.  They both are a happily married couple.  There are some episodes, of jealousy in between. They help and interact with people who migrated from other countries and found work. The twist in the novel comes, when the hurricane hits. Tea decides to stay back, despite the warnings from the government. He and Janie survive the bad weather. Eventually, Tea saves Janie from dog bite but gets bitten. He gets rabies. He also starts to develop jealousy towards Janie.

Until one day, they fight, Janie, shoots him dead. The court rules in her favor. She returns home to Eatonville. She narrates her story to his old friend Pheoby.

The main character of the story is Henri Charriere, everyone calls him Papillion. The main reason is the tattoo of a butterfly tattoo. His life takes another turn, he is accused of murder. He never committed. His lawyer tries to convince the judge but all in vain. He gets life imprisonment. He is left with two choices, either do an appeal to lessen his jail term or escape from jail.

He pursues the later plan after he lands in jail. He soon finds other prisoners, who help him to escape from the jail. His freedom comes to an end when he is captured in Venezuela. Henri escapes from here as well. He settles down with a woman and her sister Lali. He wants to take revenge on those people who trapped him in this case. But one day he is amazed to know that both his wife and sister are pregnant. He spent the next two years in jail. He tries to escape but this time he fails. His term is reduced from eight years to one year and 7 months. He was fortunate because he saved a young lady from the shark’s attack.

He acts like a normal man, so the authorities take him to a rehabilitation center.  He successfully ran from there as well. Finally, at the end of the story, he heads to Venezuela where he hopes to get a further reduction in his jail term.

The author is working for Facebook. She tells about her own life. She talks about the taboos, which are common in a male-dominated society. The parents introduce the main misconception, at a very early age. The male child is dominant. They are allowed to make decisions about their lives. They often get paid more than their women counterparts. She has broken this glass ceiling.

She took off the label on women, which they are meant to sit at home to look after kids. Sheryl goes on to say that, women have and should get equal opportunities as compared to men. They should also pursue their dreams, by being successful in their careers.

It all starts with standing up for the inequality in society. Every woman should work on her personal development right from an early age. She not only looks for successful role models like Sheryl Sandberg. But also learn more skills. This can begin by dreaming big. There are important lessons in this autobiography, which are as follows:

Reading broadens the mind, opens new horizons to its readers. Many have written about their startups. Anyone can benefit from their success and failures. It is worth time spending and pondering. There are some written by famous women.  I think it’s easier nowadays, to get access to the best books for starting a business. We are sitting at home during the day.  So it can become the best way forward, towards self-empowerment.

It is also worth knowing that there are industry experts, who can assist women in streamlining the business plan, give insights into the competitions in the market. They have the experience. So anyone can learn and get back to them in case of any difficulty.

When I was on the final few pages of the third book, there was an announcement for the flight.  I also headed towards the line with other passengers. I noticed many changes in my thoughts. I felt more energized. It was worth the time and the money well spent.