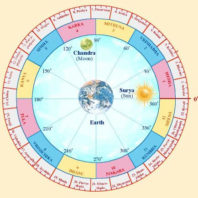 Difference between Hindu and Gregorian calendars

As the human race evolved, the man felt the need to calculate time and device a mechanism which could be studied and noted for present and future referral as well as to study the time period of past years.

A device that would help segregate time into a number of days, months, years and also help us understand the season accordingly and would be used to keep a track of the era. This is when the Calendar was formulated.

Calendar back then was used as a tool to decode what day it was and which tithi and Mahurat are auspicious and which are not. Calendars differed and still differ from place to place as the calculation of dates, time and period differ.

Through this article, we are going to impart knowledge about two types of Calendars namely the Hindu Calendar and the Gregorian Calendar.

In India, at present, there are four types of calendars which are used by people of different communities. These Calendars are the Saka Samvat Calendar, Vikram Samvat Calendar, Hijri Calendar and the Gregorian Calendar.

Although various types of calendars are used by people belonging to different sects or communities, the Gregorian calendar is a standard calendar which is globally accepted as the principal civil calendar that traces the transit of time. Let us take a look at each of the above-mentioned calendars

According to the Saka Samvat calendar, ‘Chaitra’ is the first month of the year which begins on the 22nd of March and comprises 30 days but in leap years it comprises 31 days and thus the first day of the year is counted from 21st of March.

In a year the months that fall in the first half comprises 31 days which marks the slow movement of the Sun during this time across the ecliptic.

Given below is how the structure of Saka Calendar looks like along with the tropical zodiacs each month is associated with.

The Vikrami calendar is also referred to as the ‘Vikrami’ calendar and is used by many Hindus in different states of India. The Vikram Samvat is Nepal’s official calendar.

In the Vikram Samvat calendar, an additional lunar month is added with scientific reasoning. This month is added either once in three years or appears seven times to be precise in the cycle of 19 years. The reason this additional month is added is to make sure that the festivals and other important events like farming and growing of crops fall in the correct sessions. This extra month is called the ‘Adhik Maas’.

Hence because of all the inappropriate timings and miscalculations in the designated dates of the festivals and the solar year as calculated by the Julian calendar, Pope Gregory found a new calendar. One of the main reasons for finding the Gregorian calendar was also the fact that the solar year dates did not match with the designated date of Easter.

The Gregorian calendar is formulated on the movement of the earth and its rotation around the Sun. According to this calendar days are added to the lunar months in order to balance the mismatch between 354 lunar days and 365 solar days.

Now that we have some idea about each of these calendars let us take a look at the difference between Hindu calendar and the Gregorian calendar.

There are many differences that can be clearly distinguished between the Hindu calendar and the Gregorian calendar. These differences are as follows

According to the Gregorian calendar, the days of the week are named after Roman gods, as well as the sun and moon.

Time plays an important role in every living being’s life. Festivals and important religious and cultural days and their Tithis play a significant role in the formation of a calendar. The way a Hindu calendar is made according to the moon’s rotation around the earth similarly the Gregorian calendar is made according to the movement of the earth around the sun. Thus, the basic motto of any calendar is to have a clear picture of the time and to divide the year by balancing the solar and lunar month and by having a clear alignment of Hindu festival calendar, the mahurats all play a pivotal role while making a calendar.