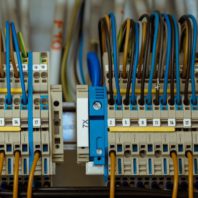 Fuses are mainly located on the plugs of electrical appliances. They are designed to self-destruct whenever there is a power surge or over-current situation. By doing so, the fuse is able to break electrical current from flowing hence saving the rest of the circuit from burning. In this sense, the collateral damage in the event of a surge will be less expensive. There are numerous types of fuses. There are those you can test by just looking at them while others require further tests using a test light or multimeter.

There are numerous types of fuses. Discussed below are some of the common ones found in consumer electronics;

They are mostly used to protect electrical appliances like pumps, refrigerators, PCs among others. They possess a high voltage and current rating. The maximum rating available is 600A and 600V. Cartridge fuses are widely used in industries and commercial distribution panels. They are further categorized into to, the heavy duty and the ordinary cartridge fuses.

Blade type fuses come in plastic bodies have two metal caps to fit in the socket. They are mostly used in automobiles.

Other types of fuses that are less popular but are still used to protect circuits include; HRC, axial, SMD, High Voltage and Resettable Fuses.

If it is possible to remove the fuse the better. This way you can remove it and inspect it visually. Ordinary cartridge fuses are particularly easy to inspect. If the ordinary cartridge fuse is blown you will be able to tell that by looking through the glass. For cartridge fuses that have opaque casing and other types of fuses, you will need to use a multi-meter. Set the multimeter to test for continuity or measure resistance.

If you are not able to easily remove the fuse from the circuit then you can test it by measuring the voltage across it with a digital multimeter. To achieve this, leave the circuit powered and set your multimeter to measure voltage. Take proper precautions to ensure that you are not exposed to dangerous voltages. Place the multimeter leads on either of the fuses. If the potential difference between either side of the fuse is zero, then the fuse is intact. If there is a potential difference between the sides then the fuse has blown.

Fuses play a critical role in ensuring the safety of the circuit and wiring system. However, they can be very inconveniencing when they blow up. In the event that this occurs, the fault-finding skills discussed above can come in handy in identifying and replacing the faulty fuse.