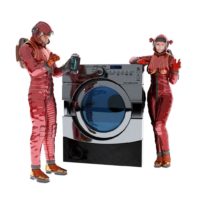 How Do Astronauts Clean Their Clothes?

How do astronauts clean their dirty clothes when they get messy? It’s difficult to do laundry in space because there’s no space for extra clothing. I’m sure NASA has come up with a solution.

Well, the answer is they don’t.

In the International Space Station (ISS), it is impossible to wash clothes. Simply put, it would require a lot of water.”

In other words, astronauts wear their clothes until they are too dirty, then throw them away. When the ISS reenters, all debris burns up in the atmosphere.”

Today, I’ll explore How do astronauts do laundry? Let’s move on!

What Do Astronauts Wear in Space?

That means they can spend their days in space wearing shorts and t-shirts. Spacesuits are extremely difficult to put on and to wear.

How Do Astronauts Do Laundry?

The most essential thing on a space station is water. For example, if washing powder, detergent, or anything that comes off the human body touches the water, it will contaminate the water source, making it hard to be purified. It’s all about recycling water if we want to achieve water conservation.

Due to this reason, we do not do laundry in space orbit. We have done calculations and assessments. A disposable clothing system proves to be more cost-efficient. That means changing new clothes and disposing of used ones at regular intervals proves to cost less than washing clothes.

The most frequent changes are underwear; after that comes sports shirts, socks. Working suits and formal dresses can last longer and be worn for more than a month. We have set a different schedule for different articles of clothing.

Astronauts must maintain their bodies in tiptop shape to avoid being adversely affected by the conditions in space, and this can result in their clothes becoming stiff and sweaty.

Astronauts will inevitably have to dispose of some of their dirty clothes. Other items, such as spacesuits, are shipped back to Earth for cleaning and repair utilizing cargo spacecraft which burn up in the atmosphere of the Earth.

The space agency is now researching cleaning astronauts’ clothing instead of throwing it away.

In collaboration with the brand Tide, NASA is exploring how to clean astronauts’ clothing in an environment with few resources.

According to Tide, it has developed a “fully biodegradable detergent specifically designed for use in space,” which will help astronauts maintain a cleaner environment and remove stains.

In 2022, the detergent will be added to a launch for the ISS, where teams will have the opportunity to test it.

What Do Astronauts Do With Dirty Clothes?

After a certain period, astronauts have to get rid of some of their dirty clothes. They are sometimes put aboard cargo spacecraft that burn up in the Earth’s atmosphere, while other more costly items like spacesuits are sent back to Earth for cleaning and maintenance.

Do Astronauts Wear Spacesuits all the time?

The majority of the time, astronauts no longer need to wear spacesuits. Whether traveling in a Space Shuttle or visiting the International Space Station, they usually wear blue overalls or even their clothes. Usually, astronauts wear customary overalls instead of space suits when they are in space.

How often do Astronauts Change their Clothes?

Astronauts would require a lot of money to send them fresh clothes from Earth regularly, so they each only have a limited number of items. We wear these over and over again until they become smelly or dirty to wear. It is possible to wear specific articles of clothing for days, weeks, or even months at a time.

The astronauts’ clothes do not pick up dirt from outside the spacecraft, so they become less dirty as quickly as those of people on Earth. In addition to carefully controlling the temperature, astronauts tend not to sweat a lot on the ISS.

What Do Astronauts Wear Under their Suits?

An astronaut’s Liquid Cooling and Ventilation Garment is worn under their spacesuit. These tight-fitting garments are woven with tubes that cover the upper half of the body and only the hands, feet, and head. When an astronaut is on a spacewalk, water flows through the tubes to calm him.

As on Earth, astronauts are dressed in the same manner as us. Astronauts can’t do their laundry inside the Space Shuttle. Each astronaut brings several sets of underwear with them to change every day. The astronauts bring extra cotton shirts and pants with them as well.