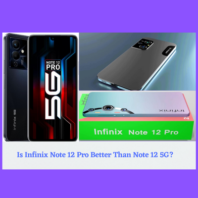 Infinix is a 9-year-old company and it was started by Transsion Holdings. Infinix Mobile Company has a manufacturing plant in China. The best thing is that the price of Infinix Mobile is better than other brands because Infinix is providing various features for the same price.

We have made a specs comparison of both. So you can easily know which one is better and why.

They have the same operating system. As well as the user interface are the same, which is Android v12 and the UI is XOS. Both of the smartphones are available in the same 2 colors, Black and White. The weight and the dimensions of Infinix Note 12 Pro and Note 12 5G are the same. Mostly, all the things are the same in the build quality of both Infinix Mobile.

Each one of them has a triple camera in the rear. But the difference between them is that the former has a 108-megapixel camera, whereas the latter has only a 50-megapixel camera. If we compare the features of the camera, they are the same, but there is a huge difference between picture resolutions. The front selfie Camera of them is the same. And the features of it are also the same.

The screen size of both is 6.7. Which is equal. Both the Smartphone’s display screen protection comes with Corning Gorilla Glass v3. Their refresh rate of them is 60 Hz. They share the same AMOLED display.

If we have a look at the processor comparison between them. There is no difference, both smartphones have the same processor. Both the devices have the same chipset as MediaTek 810 and the graphics used are from the Mali G57.

The built-in storage of the former is 128GB, whereas the latter has only 64GB of built-in memory, which is quite low. Both of them support up to 2TB microSD cards. There is a difference between the RAM of both of them. The first one has 8GB of RAM and the second one has 6GB of RAM. The battery capacity of both smartphones is 5000 mAh with 33W fast charging enabled.