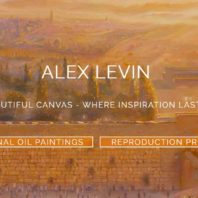 From the beginnings of the Jewish people in ancient times to the present day, the art of this great nation has progressed over the years. Although in its beginnings the Jewish people showed themselves as aniconic due to its strong religious tradition, modern Jewish art also includes, in addition to literature and music, plastic manifestations such as painting and sculpture. This transition to an iconic and representational art style takes place thanks to the integration of the Jewish people into Western societies after the 18th century.

Within the rabbinic literature that was present in the Middle Ages, it is observed that texts were mixed with graphic art. Typically, the texts tended to be manuscripts that Jewish artists decorated and illustrated. Two of the most famous manuscripts were the Majzor of Nuremberg and the Sarajevo Haggadah.

The backwardness of the Jewish people’s participation in the visual arts was paralleled by their backwardness in the production of classical music until the 19th century, but both were overcome with the advent of modern art in the 20th century.

In contrast to previous centuries, in the 19th century, particularly after World War I, it could be observed that the number of Jewish artists increased considerably, and with it, the artistic activity of this style of art also increased. This increase in the number of artists resulted, at the end of World War II, in numerous contributions to Abstract Expressionism. In addition, thanks to Jewish art, the impact of the Shoah can be found in artists such as Mauricio Lasansky, Elsa Pollak, and Samuel Bak.

Without pretending to point out that all Jewish art today is produced in Israel, we can say that the central structure of what we can thus define is developed in this small country of about 20,000 km.  I say this because I consider that the Israeli painting and sculpture are heirs, not only of its short tradition but are influenced by the first artists who arrived in that country and by all the prevailing plastic currents in the world.

Today Israel is a thriving country and undoubtedly marks a path in many aspects of life. Literature, music, theater, and dance are perhaps the most developed artistic expressions in that country. On the other hand, and despite having great artists and some renowned museums, the world of the plastic arts is still in a stage of development.

Many Israeli artists participate in major international fairs and events. Many artists, Jewish and non-Jewish, travel to Israel in an exchange of experiences. Many Israeli artists exhibit and work in different countries around the world, mainly in the United States and, to a lesser extent, in Europe.

It is evident that artistic creation in Israel today is exposed to the same vicissitudes as in the rest of the world. It is possibly much more complex to define art with national characteristics today. The vast majority of Israeli artists paint, draw and sculpt the same things as in other parts of the world.

Nevertheless, there are artists, institutions, and individuals involved in the development of Israeli painting and sculpture with distinct characteristics.