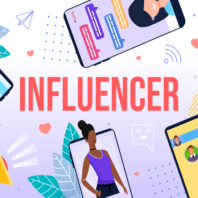 Nano & Micro-Influencers: Definition and Why are they so effective?

Nano influencers in India are a cost-effective, efficient, and, most importantly, a lucrative alternative to traditional influencer marketing. Consider them to be the popular students in school. They are liked by everyone without even trying. They just share their passions, whether it’s for their dogs, sports, cuisine, gaming, or fashion. It’s all there.

Their following spans from 1000 to 10,000 people. You’d be right in thinking that’s a tiny amount of money for a company attempting to promote its products and generate some sales. Nano influencers, on the other hand, are very inexpensive compared to micro and macro influencers, who charge anything from $200 to hundreds of dollars for each post. The cost of a single post from a micro-influencer range from $10 to $100. They are effective for the following reasons:

Individuals with 1,000 to 1,000,000 followers/audience members who are regarded specialists in their particular niches are known as micro-influencers. To name a few, they may be a culinary blogger, tourist, local fashionista, or fitness guru.

These smaller, more concentrated specialty specialists interact with their audiences on a deeper level and produce more engagement. Benefits of hiring Micro-Influencers:

These micro-influencers are usually surrounded by a tribe of people who share their interests. Finding someone who caters to your exact target demographic is the only way to be effective with micro-influencer marketing. Otherwise, you’re squandering money on non-buying audiences.