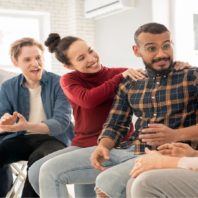 Terms To Know To Understand The Meaning Of Addiction Treatments Staff

When you or someone in your family or friends enrolls in an addiction treatment center, it will be a somewhat long journey until the final recovery. During this period, you will come to k ow many terms that will be new for you. Thus, before you approach the best addiction treatment, learn the following terms so that you can understand what the office staff members really mean.

It is a therapy based on this psychological practice in which the user works his emotional world and his link with the experience through his body while it flows with the music played by the therapist.

This is how the various sectors of the rehab facility are called, such as the dining room, the kitchen, the TV room, the patios, etc. They are assigned to various users for cleaning.

It is a notebook where every night, at the end of the day, users write a living diary of their emotional and operational world.

It is a person, place, or thing with which the user cannot have any type of contact. In fact, a user cannot stay in the same area with a quarantine unless someone from the clinical team is present. Also, in the group therapy space, people who are quarantined should avoid eye contact. This is to protect and prepare the user for the context of the real world where a quarantine would be active addicts and dealers or spaces where consumption takes place. Likewise, multimedia contents explicitly linked to drugs are quarantined.

It is to leave the responsibility of a certain task to another user due to the impossibility of being able to do it for a just cause. Likewise, it is called delegating the action of donating some type of own food to another user in the food space. Such action must be authorized by someone on the clinical team.

It is also called a therapeutic team and is made up of psychologists and operators of the therapeutic community.

It is a type of indication or observation that the clinical team gives according to the experience of the user at a certain moment so that they become aware of some particular aspect of themselves.

They are the diverse responsibilities that the different users have for the correct operation of the rehab center. These can even change according to the day and week so that on a given day, a user may be instructed to prepare food and during a particular week to clean a specific area of ​​the house.

He is a user who has been in treatment for a long time and performs an induction task to a new user. Likewise, the user with the longest tenure in the rehab center is considered to be the older brother of the house.

These are indications given by the clinical team. They have the function of helping the user therapeutically.