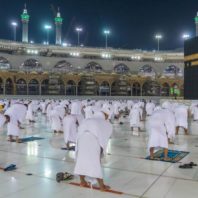 Before the founding of the Saudi state, the pilgrimage was a dangerous journey, banditry was spread against the pilgrims, therefore, the pilgrims did not walk alone but always in a group, for the poor security conditions and mess, and when a man decides to travel for Hajj, his parents and friends tell him, “He who goes out for the pilgrimage is gone and he who returns is born again”, the pilgrim faces risks from all sides, either bandits or natural disasters such as floods and rains or the scarcity of water or predators that meet him during his journey, and, in addition, the fees paid by the convoys in order to allow them to pass.

The Arabian Peninsula was inundated with chaos and instability, it was formed of small emirates, all its visitors are exposed to looting, and the pilgrim convoys were the most affected by this chaos, the brigands were reckless, so that ‘they were killing all the pilgrims in the convoy, the conditions for the pilgrims were dominated by fear and panic – before the Saudi era – in most of their travel times, as well as illness, physical stress and theft that reaches the Haram.

Ibrahim Refaat the author of the book “Miroir des Deux Saintes” describes the security situation in Mecca at the beginning of the 20th century, that those who want to visit the Mountain of Nour – which is a mountain near the Great Mosque where is the cave “Hira” – must carry enough water with them, and that they must be in the form of groups, carrying weapons to defend themselves against thieves who want to steal their property, one of the horrific images he mentioned in his book, that he had heard a Bedouin who killed a pilgrim and he did not find with him only one riyal, Mr. Ibrahim said to him: you killed him for only one riyal? He said with a laugh: the Riyal is better than him ”

Ibrahim also said that the authorities at that time stood motionless in the face of this chaos, watching the injured people and pilgrims so that one “night, arriving from Mina to Mecca, a fight took place. is triggered between the Bedouins in front of the Cabinet, and no one reacts, in spite of the death of eight people ”.

Confirming what was stated by the author of the book “The Mirror of Two Saints, the Kurdish Mohamad Tahir mentions in his book” The Faithful History in Mecca and the Holy House of God “, the outbreak of numerous disputes in the interior of the Haram during the season of Hajj, and he recalled that in the month of pilgrimage of the year 1326 Hj. A fight took place near the region of Safa and the gate “Al wadaa”, Both sides have exchanged fire, and resulted in the death of several soldiers and civilians.

The Risks of Hajj were not only thieves and bandits, but were also pilgrims’ routes which were full of danger, floods, and rain, either within the Arabian Peninsula or outside, of so that some pilgrims from Kuwait prefer to travel by sea, for the lack of safety on the road in the Arab peninsula, and this despite the difficulties of the trip by sea, so that they went to Pompeii and then to Jeddah via Bahrain, Qatar, Dubai, and Bandar Abbas, Muscat, Karachi, then sail by ship to Pompey in Amman then Mukalla and Aden and Berbera until they reach Jeddah, and they will assume all its difficulties for a period of about one month to avoid the risks of land travel.

The pilgrims of the Arabian Peninsula suffer like the pilgrims coming from outside, when they headed towards the Hajj, they left their lands, either from the south or from the east, after the little Bairam (Eid al-Fitr) during ‘a two month journey by camels and on foot, and some of them die on the way before reaching Mecca due to disease or snakebites, and they march in groups for fear of the bandits.

However, the situation became very different, after King Abdulaziz entered Mecca his first concern was safety and how to secure the route of pilgrims, Chakib Arslan, the prince of eloquence who traveled on the pilgrimage in 1348 Hj says: “If the Saudi regime has an advantage only this security which has been spread over lives and money in the deserts of Hijaz and Nagd, which have become more secure areas than the streets of European metropolises, this was enough to bring hearts and tongues to praise him ”, and he recounts how his coat fell from the car when he was on the road to Taif and people passing by see this coat fallen on the side of the road and anybody

Almuslim Travel is the leading source of Providing 5 Star Umrah Packages 2022 deals for many years.Almuslim Travel facilitates our clients by flight reservations along with complete deals of hajj packages. Our Muslim brothers and sisters living in the UK can take off from their closest airports and choose the most suitable dates for departure and arrival. Being a trusted travel agency over 40 years of experience, Almuslim Travel prodly commits to provide an exceptional and enriching travelling experience for the most spiritual enchantment “Hajj” & “Umrah“ and we take pride to serve one of the Best all inclusive Umrah packages and Pilgrimage in all around United Kingdom. So perform the holy journey to Haram and Masjid e Nabvi with Almuslim Travel will complete ease and comfort and get mesmerizing moments of the life.