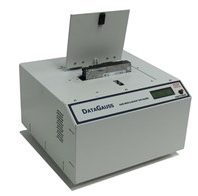 What is a Degausser

It is a machine used to eliminate data stored on computer and laptop hard drives, floppy disks and magnetic tape, by randomly changing the alignment of magnetic domains on the medium.

Degaussing takes its meaning from Johann Gauss (1777-1855) a mathematician who studied and worked on electro-magnetic fields. Data is stored on magnetic media by making very small areas called magnetic domains change their magnetic alignment to be in the direction of an applied magnetic field. Degaussing magnetic media leaves the domains in random patterns with no preference to orientation, thereby rendering previous data unrecoverable. A degausser is therefore used to completely erase all audio, video and data signals from magnetic storage media.

This process is effective in a range of industries including video, audio, computer, broadcast and data security.

Benefits of Using a Degausser

Simply overwriting magnetic media does not completely erase data. Only a degausser can remove data 100% and ensure that confidential data is securely and completely erased.

How does a Degausser work?

It works by passing any magnetic media through a powerful magnet field to rearrange the polarity of the particles, thus completely removing any resemblance of previously recorded data. Although this process of course is simple in theory, in practice, the vast variation of media formats and magnetic densities makes the correct process quite difficult to achieve.

The operation of degaussers will vary depending on the type and quality of media and the speed and degree of erasure required. When erasing tapes, either the cassette must move through the magnetic field or you must move a magnetic field over the cassette. In each case, the consistency of the motion, the strength of the field and the distribution of that field over the entire media are what determine the quality of the erasure.

Most professionals and engineers agree that a conveyor transport degausser, which allows the user to place the magnetic media on a small belt, which in turn passes the media through or over the degaussing coils at a constant speed, assures the most uniform process. Custom-designed degaussers can assist with the specialist needs of bulk operators with belt feed conveyors; collection hoppers are available to deal with tapes, disks and reels, all helping in making the operation effective & efficient.

The resultant benefits are substantial, producers of audio and video tapes achieve better yields as well as increased quality. Data users enjoy greater efficiency due to considerably reduced “error rates”. Professional users in every sector, from government to business, benefit from incorporating degaussing within their magnetic media processing procedure and achieve considerable cost savings by being able to confidently reuse again and again media previously discarded.

Points to Consider When Choosing a Degausser

Who uses a Degausser?

Anybody who uses magnetic media will benefit from the use of a degausser, including: