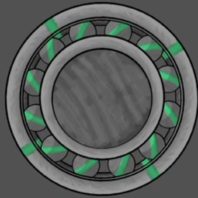 How do the bearings work?

Have you ever wondered how electric motors and skate wheels can turn quietly and smoothly? This is because of a neat little machine popularly known as the bearing. It is a very useful tool that is responsible for the proper functioning of various machines that we use in our daily lives.

Without the bearing, we will regularly replace various parts because it is easily worn out by friction. Therefore, in this section, we will explain the working of bearings through concepts and simple illustrations.

The basic concept of bearing

The basic concept of the bearing is relatively simple. Things that roll move better than those that slide. As an example, the wheels of a car can be similar to a large bearing. Imagine that your car is made of skis and not wheels, then it will be more difficult for you to push and maneuver the car on the road.

The reason is that the friction between things that slide causes a force that tends to slow down the movement. But if there are two surfaces that roll on each other, the friction can be greatly reduced.

How does a simple bearing work?

The simple types of bearings found in a skate wheel clearly show how a bearing works by reducing friction through smooth rollers or metal balls and a smooth outer and inner metal surface that rolls against the balls. The rollers or balls support the load, allowing the machine to rotate smoothly.

Bearings usually face two types of loads, radial and axial. It all depends on the purpose for which the bearing is used. It can be used entirely as a radial load or entirely as an axial load, but it can also be a combination of both.

The bearings found in the pulley and electric motor are examples of radial load. In this particular case, most of the weight comes from the force or tension exerted by the belt that connects the two pulleys. The bearing in the bar stool works in a similar way; it is particularly subject to thrust loads, and all of the weight comes from the load applied by the person sitting on the bar stool.