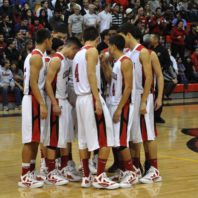 How Many Players on a Basketball Team? What are their services?

Compared to any major team sport played in North America, basketball has the smallest number of players on a team and the court. When we glance at the bench during a game, we see a lineup of players and coaches that appears to be a mile long.

How Many Players Are on a Basketball Team? The number of players on a basketball team varies depending on the level of play.

The league and the rules, but a basketball team generally has 12 to 15 players. While just 7 to 10 players on the team may experience consistent playing time, this varies from coach to coach.

As a coach, there are several factors to consider when determining the appropriate number of players on basketball. What would happen if your entire team fouled out? That happened in the NBA and will be covered later in this article.

At any given time, how many players are on the court?

Each team has five players on the floor simultaneously, for a total of ten players competing in a basketball game.

Dr. James Naismith invented basketball in 1891 in Springfield, Massachusetts, while teaching students to be instructors at the YMCA. His superior suggested Naismith make a game for his students to keep them occupied during the winter months.

In his class, Naismith had 18 students who turned the game of basketball into a nine versus nine games. The regulations were already in place when the game took off.

I’ve been coaching basketball at this level for a long time, and I’ve seen many players come and go. If you’re a basketball school where the game is life, you can get away with only having 12 players, with two of those players serving as managers who can take stats throughout a game if necessary.

How Many Players Are on a Basketball Team? Twelve players will be more than enough, and they will show up to practice ready to play; players will prioritize basketball. That is an ideal number if you have a dedicated core; fewer people will grumble about playing time, less drama among the players, and enough bodies to execute a scrimmage during practice.

Some topics to think about If you are not from a basketball school and you anticipate a difficult season, you should consider adding extra players to your squad. When a team is struggling, many players will choose to skip practice on occasion.

Basketball Teams from Colleges and Universities

A collegiate basketball team can have up to 15 players, but only 13 players are allowed to sit on the bench and play. The other two players must sit behind the bench rather than on it if the school can afford to send them on a road trip while staying within its budget.

Some schools, to save money, will only have 11 to 13 players travel, which is understandable given that not all players play.

When a college or university recruits, not every player on the squad receives a full scholarship, some players receive partial or no scholarships. Not every school is like Duke or Kansas City, where money isn’t an issue in programming because I’m sure their athletic teams receive adequate support from philanthropic donations.

How Many Players Are on a Basketball Team? A club can have up to 15 players on it in the NBA, but only 13 of them can be deemed active. Teams can have up to three players on injured reserve. However, all players must travel with the squad from city to city unless wounded. It is regarded as a poor idea to avoid prolonging the injury and allow the player to rest and recuperate.

When players are injured, and teams want replacements, players from the G-League, often known as the development league, are signed. Players typically sign a three-day or seven-day contract that extends from contract to contract depending on the team’s demands and the player’s performance.

What is the number of players for each position?

How many basketball players are on a team? That is easier on paper than at tryouts when you select the team. Every one of your starting five should have a backup. Although the starters outshine the backups most of the time, you tend to forget about it and instead focus on selecting the best players you can employ to assemble the ideal team, with a few big thrown in for good measure.

How Many Players Are on a Basketball Team and what are the rules to follow? A team may substitute one, two, or more players simultaneously during a substitution.

Tagged with: How Many Players Are on a Basketball Team