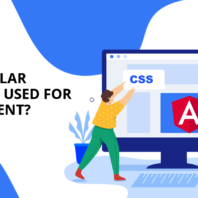 Why Angular should be used for Development?

Angular is one of the top frameworks in the JavaScript ecosystem used to develop some great applications. Angular is an open-source front-end framework introduced by Google for creating dynamic web apps. Today Angular is one of the most preferable robust frontend tools supplying components that assist people to make the best web development services.

Now let’s discuss why Angular should be used for the development of your next project?

The structure of angular is interesting as it contains the code into buckets, whether it is components, directives, pipes, or services. If you are familiar with Angular you must know that modules make application functions easy, segregating it into features and reusable chunks.

One of the major benefit modules have is lazy loading and it paves way for app feature loading in the background on-demand. What more you want when angular makes it possible to divide the labor across different team members while ensuring organized code? Hence more than the merrier, developers can improve productivity with appropriate modules built.

As a developer what could you more ask if you can find a solution to each query? Yes, because of its exhaustive documentation angular is highly preferable. Here a developer can find any information related to the development.

Angular components are independent of each other and make unit testing much easier.

Code consistency is important because inconsistent coding increases the risks of delayed launches. Besides, I agree coding has several benefits, like it makes sites easier to use and enables the use of templates.

Now here what I mean by readability is that easy understanding of codes. Because consistency in coding makes reading code a piece of cake for new developers on an ongoing project, which adds to their productivity.

It’s quite open that Angular uses HTML for UI designing. HTML is one of the popular language among developers and is declarative and intuitive in itself. Using HTML with Angular, you do not have to decide the flow, instead you just share your requirements and the rest will be managed by Angular.

Angular component-based structure makes it highly reusable across the application. It means you can easily build the UI with moving parts and ensures a smooth development process for developers.

Google is one of the biggest firms in technology and the talented pool of Google developers are offering Long-Term Support (LTS) for Angular to scale up enterprise Angular applications development. Also, a lot of big brands such as Netflix, Gmail, YouTube TV, up-work, and others use the Angular framework.

Apart from the above, there are several benefits and advantages Angular provides to developers. This is why most of the popular organizations around the globe use this tool for their web development project. We, at Shiv Technolabs Pvt. Ltd one of the top Angular Development Company, offers comprehensive Angular development services from strategy to building a single-page application (SPA) to developing cross-platform apps.